May 31, 2019
After getting crushed at the Washington Open, I decided that if I refine my playing etiquette, I could probably have a higher chance of converting my winning positions at least. And the only way to do that is to play in more tournament environments! Not as nervous as I was last weekend for the Open, but I still want to make sure I get 2 solid games from going and not 2 blowouts, but we'll see. Round 1 starts at 7 PM, it's currently 2:33. Wish me luck!

Haven't been to a Chess Club since Chess4Life was poppin back in the early late 2000's. Was definitely a fun experience. I lost both my games, which can be found in this study: 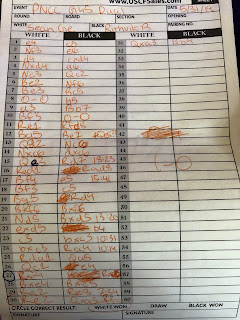 As you may be able to discern from my notation, some of the moves are impossible! This makes it extremely difficult for me to review my games, as I'm trying to figure out what was played. At this event, the boards had no numbers or letters, so I was struggling to try and piece that during the game as well. I probably should have opted for a normal board knowing that this would wear me during the game but none of the other club players seemed to have a problem, although I did talk with Sean after the game and he also said that he messed up his notation a lot because of it. Seems to be a common trend among players my level (scholastic 1300, USCF 940). Anyways, that was game 1, and after I corroborate with my peers I'll try and get the full game in the study for proper analysis. Dakota showed up, which was cool, as I've been clickin with him a lot and he's an extremely astute chess player, very accurate. He won both of his games, so props to him. It looks like the PNCC is my club of choice though, and I'll be going there more often! 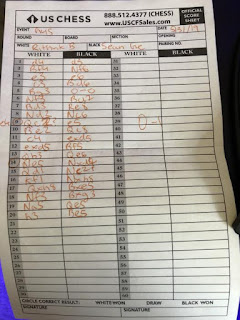 Game 2 against Sean was much shorter. The opening was the London System, but I seem to have problems playing Bishop d3 because I run into problems with the E pawn advancing and forking my bishop and knight. I have a few friends who are really good with the London, and I think I'm going to hit them up for advice... as I have a kind of cool surprise in my next post. I know John Rossell, a strong expert, will be giving me a book on the London so I'm excited for that.

Overall, the 2 losses were hard, but I played well during the first game. I blundered my Queen under time pressure, but I did have 6 minutes. Even though I was rushed to calculate out my winning attack, I didn't have to rush a move so quickly that it would just hang a queen. These are mistakes I didn't make as scholastic player that a 10 year hiatus has brought upon me, so I'll be working on that as well. After playing in 2 events back to back weekends, it seems like the main thing I need to work on are... tactics, tactics, and... more tactics! I will be doing tactics on an app that Class A player Michael Hosford recommended to me, and it has done me wonders for being able to conveniently get some tactics in on the road or whenever I'm busy. I'm also going through the Yusopov books, but I'm rambling at this point; PNCC was great, met some chess friends I met at the WA Open, and I look forward to competing in more events there and becoming and active club member.

Popular posts from this blog

May 31, 2019
Hey everyone! My name is Rithvik Bharath, and this is my first official blog post! As i've advertised on some other platforms, I will be creating a blog... on my experiences as a flourishing chess aficionado. I started playing chess in 3rd grade, where I attended Alcott Elementary. I attended the chess club ran by Michael Hosford at the time and became a 1300 scholastic player averaging 4/5 at the State Championship every year until 6th grade. After elementary school, my chess endeavors took a hiatus as other activities consumed my life. In high school I briefly played again at the Redmond High school Chess Club ran by Samuel and Daniel He, however I wasn't to serious about progressing or playing at the time. After high school, I took a couple of years off, and 2 weeks before the 2019 Washington Open I hit up Mike, my old coach, and asked him what I should do, and he told me to attend the Washington Open. I look at the roster, and sure enough, Daniel and Samuel were playi
8 comments
Read more
June 01, 2019
I have some exciting news! Although my performance in my first 2 events, the WA Open and the PNCC club event, were abysmal, I learned a lot about my strength's and weaknesses's at the event. I woke up this morning with a text from John Rossell asking me if I wanted to attend the National Open in Las Vegas. At first, I was hesitant. I had just gone 2.5/7 in the WA Open, and in the PNCC event I hung my Queen. I've been performing pretty badly for my rating; 1300's don't hang queens, I dont care what you say! But in hindsight, I've only been back into chess for less than a month and the amount of time I have to study, although plentiful, isn't consumed by the myriads of other activities and endeavors I pursue that aspiring players are using on chess. This is no excuse; I've created this blog to make my study more serious, encourage actively entering my games online so my readers can view the games - it's a snowball effect. But, alas, he coaxed
1 comment
Read more

Rithvik
dm me on instagram, @rithvik, for the fastest response.